Six Days that Shrank the World 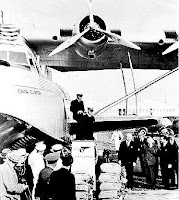 Around the World in Record Time

Anatomy of a Hijack

Tasting Wine With The Experts 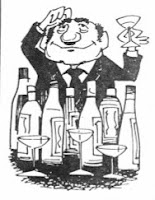 One More Hour to Play

by Ambrose Blake (Tom Emch)
Now that we're back on Daylight Savings Time and the sun is coming up later and you're going to work earlier, we can sit back and contemplate, logically, what has been done to our lives - by an act of Congress.
Last Sunday you turned your clock ahead an hour so you lost an hour's sleep. One full hour was stolen from you. If you were in a Las Vegas casino, where they have no clocks, you probably didn't notice the theft. But most of us noticed right away. We were told by our stomachs.
Instead of getting hungry (or thirsty, as the case may be) at noon, we found we were really not ready for the filet of sole until one o'clock, at which time we had to be back in the office.
I know people who have developed a clockwork-like thirst. They get a tremendous dryness on the roof of the mouth at precisely five in the afternoon, and they've found they're not enjoying their cocktails at four o'clock by the sun's time. Then later, the real thirst strikes them on the freeway, in the middle of the commute. It's a terrible inconvenience.
We all know that Mother Nature doesn't like being tampered with. And it's easy to see the enormity of the tampering if you can imagine yourself one of the nation's millions of cows. Just ask yourself how you would like it if some farmer tried to milk you an hour ahead of your regular time. It's a well-known fact that Daylight Savings Time makes for some very uncontented cows, and a measureable drop in the milk supply.
A lot of European countries go along with this madness. There's British "summer time" which started April 6. A total of seventeen countries switched at that time, but Portugal, Poland and Czechoslovakia held out for two weeks.
Switzerland, a country that knows something about clocks, and Yugoslavia have both voted against Daylight Savings Time, making them an island of sanity on a continent out of synch with the solar system.
This causes confusion in border towns like Geneva or Trieste. French businesmen miss dates with their Swiss mistresses and Italian smugglers are late for their rendevous with Yugoslav sailors. It can also get complicated if you want to call your banker in Zurich. If youre' not careful, he will be gone for the day.
It all started with Ben Franklin way back in 1784. Ben was at a dinner party in Paris and admired a particular oil lamp and the light it gave off.
He got to thinking whether the oil consumed was in proportion to the light it afforded. The thought kept him awake until well after midnight and at six in the morning a sudden noise awakened him. He was surprised to find the room filled with light. He soon realized that it was the sun beginning its early rise that time of year, and he immediately began calculating the sum the city of Paris would save by adopting an "early to bed, early to rise" policy, using sunshine instead of oil lamps and candles.
Franklin figured Paris would save sixty-four million pounds of wax and tallow in six months by getting up an hour earlier. An idea was born, but it was ahead of its time. Frenchmen have never been fond of getting up early.
William Willett of Chelsea, England, gets the credit for the campaign and adoption of the daylight saving system. The plan was described in his book, Waste of Daylight.
The British Parliament rejected his idea several times before finally adopting it in May, 1916. They were a year behind the Germans, who had adopted the system in 1915 to save fuel during World War I. In 1918, the U.S. Congress passed a bill authorizing advancing clocks one hour from the last Sunday in March to the last Sunday in October. It was repealed in 1919 because farmers (and probably their cows) objected strongly to readjusted work schedules.
In 1942, during World War II, the U.S. again adopted Daylight Savings Time and after the war it became a state option. California had the system off and on and finally passed a proposition adopting it in 1949. In 1966, Congress passed the Uniform Tim Act and ended the confusion between states and even portions of states.
The normal six-month cycle is from the last Sunday in April to the last Sunday in October. But this was changed in 1974 when Congress put the U.S. on year-around saving time for two years to save on energy. In 1976 the normal cycle resumed.
There is still scattered opposition to the system, particularly in the rural South and Southwest and in the Midwest. And there are a lot of urban people who object on the grounds that their metabolism gets upset twice a year. They don't always know when they're supposed to be hungry or thirsty, and they like to sleep late anyway.
It was Ben Franklin who started tinkering around with solar time; it was William Willett who sold the idea to Parliament, and the U.S. Congress made it a law here.
But in San Francisco, only a fool will wait until one o'clock for a drink when the dryness on the roof of his mouth tells him he's thirsty at noon.
San Francisco Examiner/Chronicle
Posted by Becky Emch Tamura at 8:58 PM 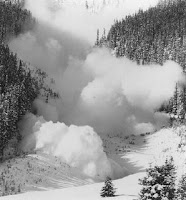 Reminiscenses of a Chili Freak 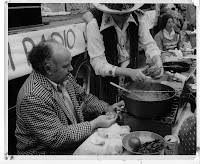 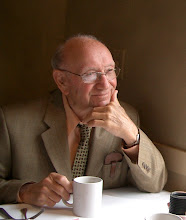